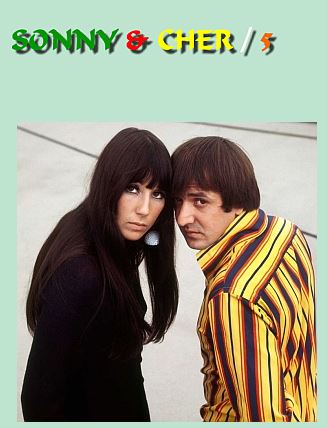 With "The Beat Goes On" stomping into the Top Ten, 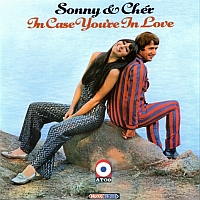 Sonny delivers a poor album in the form of IN CASE YOU'RE INLOVE. Record buyers may be quick to forgive a bum single here and there but in 1967 they don't want an LP full of them. Only four new tracks appear on the album, and they're not representative of the new directions rock is taking. They're dispassionately-done oldies, with uninspired Spector-ish productions. Harmony vocals are out: verses are simply traded between Sonny & Cher, with a little too much Sonny.

"A little too much Sonny" will define the 1967 deline of Sonny & Cher. The United States is fast becoming poltically polarised and Sonny's allegedly centrist" message is lost to all sides...especially a fan base and punters who've moved on musically. His loudly out-of-touch politics probably hinders record sales, and the same can be said of his music. "Who cares?" is the apparent response to the notion espoused by the album title. The groovers and heads smell a rat: Cher's fashion spread in last October's Vogue has ushered in a glossy Beverly Hills version of the duo - an image which has no resonance with hippiedom whatsoever. Undeterred, Sonny will deliver his manifesto in the form of a solo LP in September. 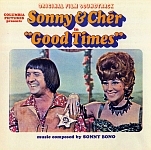 But with the GOOD TIMES O.S.T. playing on no stereos (and the movie opening to empty theaters, despite fairly positive reviews) it's going to be the year that Sonny & Cher miss the boat. The LP only has five new songs, with the Spectorian bell-ringer "It's The Little Things" being both brilliant and four years out of date. Two Hollywood-ish versions of "I Got You Babe", an old Cher B-side ("I'm Gonna Love You") and film dialog pad out an eight-song clunker with an ugly cover slick.

March recording sessions in Milan produce "Il Cammino Di Ogni Speranza" for a no-win entry in the San Remo Song Festival, coupled with Sonny soloing on "L'umanita". Back home, Leaves' guitarist Bill Rinehart produces "A Beautiful Story" to follow-up "The Beat Goes On". (Sonny has made an aborted attempt at a solo version a few months earlier.) Despite optimism and advance orders, the dreamy piece of commercial oom-pah-pah flower power fails to crack the Top 40.

As Summer turns to Fall, Sonny strikes back with a vengeance: the duo's "Plastic Man" is a Salvation Army-styled warning to one and all about phonies pushing a corrupting aganda. Musically it's fine, but lyrically it's a sermon in ill disguise, and fares worse than "A Beautiful Story". But he's far from done with the idea of peddling reactionary ideas set to music, and his solo LP INNER VIEWS is unleashed in September with much fanfare...none of which is realized commercially. "Laugh At Me" isn't included on the five-track opus arranged by Don Peake. But with Sonny's twelve minutes stream-of-consciousness rap opening the album ("I Just Sit There"), and eight minutes of a hippie chick's descent from listening to bad songs on the radio to prostitution, pot and acid ("Pammie's On A Bummer") for a finale, a lil 'ole protest ditty would possibly offer up some levity. Sunshine Pop it sure ain't. (The album will be a bulk feature of cutout bins at 2/$1 for a decade, but as a 1998 Limited Edition CD of 5,000 copies it will sell our quickly...at twenty bucks a throw.) 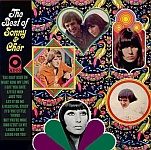 THE BEST OF SONNY & AND CHER almost makes the Top 20, and is Atco's last chance to recoup some unencumbered cash for the foreseeble future. The next Sonny & Cher 45 is an excellent blaster sourced from Mark Barkan: "Good Combination" is a horn-driven, riff-ridden popper with excellent harmonies. The B-side - "You And Me" (and bagpipes) - is another good one from Sonny's pen. The single scrapes into the Hot 100, and will be the last Sonny & Cher record to do so for four years. 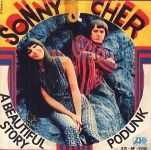 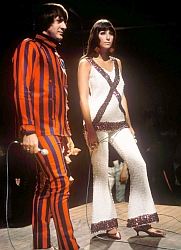 Over at Imperial, Cher's consistently sinking her teeth into the heavier stuff. Always a risky proposition, the story-in-song concept will be the theme of most of her single releases on the label, and well beyond. Our unfortunate heroine is beset by trials like being misunderstood by both parents and God ("Where Do You Go" ) and jilted at the church ("Bang Bang"). In "I Feel Something In The Air" she's a pregnant tho' unmarried teen; in "Mama" she's still single with a girl child who's on her way to be...you guessed it. And then she's dealing with murder in one of the better interpretations of the hippie classic "Hey Joe", but finally weds and becomes a father on his way out the door.

That one's "You Better Sit Down Kids". The record company refuses to release it (cos it's "too weird") but Cher goes one better than radio and breaks the song on national television ("The Jerry Lewis Show"). The record is a creative masterpiece of song construction and production: percussive effects follow a downbeat drum opening - the ending is a jazz improvisation. In between, the sentimental verse gets a shock at the bridge as the tempo shifts to 7/8 time, and the whole thing then repeats from scratch. The MOR versions which follow all use a string sustain - Sonny's version uses clarinets. Weird works again for Cher, and it works for the public. Millions have heard the same lyric from cop-out dads, and they respond by sending "You Better Sit Down Kids" direct to the Top 10. (Performing it live is difficult - even good bands struggle with the complex arrangement, as recorded.) 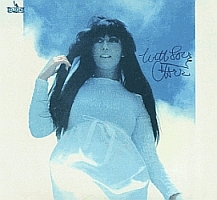 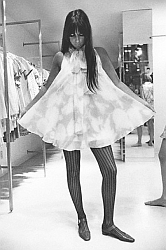 Next up, Cher refreshes herself from domestic bathos with a stab at World Music: The Manhattan Brothers' Xhosa-language "Click Song" celebrates the witchdoctor's arrival. Percussionists provide the tongue clicks - not Cher. The B-side is a throbbing ballad with a sumptuous production: "But I Can't Love You More" is from sessions earlier in the year which have yielded Cher's newest LP WITH LOVE. The highly-listenable November album won't match "Kids" chart performance, but despite Side One being a compilation of 45 tracks it's a masterpiece of sorts which underscores Cher as an artist as much as anything else. Michel Legrand's theme from "The Umbrellas of Cherbourg" (with a Cream / "I Feel Free" rhythm overlay) and Keith Allison's "Look At Me" are two outstanding gems from the diverse second side of "With Love".

Sonny and Harold Battiste continue cutting Cher solo tracks at the end of the year which will see scattered release on Imperial across the following year, with a business associate of Sonny's (Denis Pregnolato) also on board as co-producer.